The African Development Bank Group President, Dr. Akinwumi A. Adesina, joined French President Emmanuel Macron and others at the Generation Equality Forum taking place in Paris this week. He highlighted the role of the Bank’s Affirmative Finance Action for Women in Africa (AFAWA) initiative in growing the continent’s women-led businesses. AFAWA is a pan-African initiative whose goal is to unlock financing to bridge the $42 billion financing gap that women entrepreneurs face in Africa.

“Women run Africa and they should run Africa…they create more businesses than men – but the problem they have is that they do not have access to finance,” Adesina said to a socially distanced audience that included heads of state and government, former US Secretary of State Hillary Clinton and other participants from the government, development, gender, civil society, and small and medium-enterprise (SME) sectors.

President Adesina thanked President Macron for his leadership in supporting the African Development Bank in its drive to accelerate women’s access to finance and the growth of women businesses on the continent through AFAWA.

The Bank President was one of many participants invited to present at the Generation Equality Forum, a global gathering for gender equality, convened by UN Women and co-chaired by the presidents of France and Mexico.

Moderating the African Development Bank president’s segment during the forum opening ceremony, French Minister of Europe and Foreign Affairs Jean-Yves Le Drian introduced President Adesina and Gisèla Van Houcke, the founder of a Kinshasa-based SME that received a loan from Rawbank’s “Lady’s First” program. Rawbank was the first financial institution to sign on to one of AFAWA’s programs.

Van Houcke said: “In 2020, things became a lot more difficult as a result of the pandemic.  The majority of our operations were closed down. Thanks to the AFAWA program, we managed to raise the funds that would allow us to survive during the time of Covid – to double our income, to hire more than 30 people, out of which 80% were women.” She told the audience that she started her Zuri Luxury hair and cosmetics business in 2015, selling wigs and weaves out of the back of a car.

Adesina said: “Financial institutions basically discriminate against women. There is a high-risk premium women have to pay when they go to look for money. But women pay back their loans, 99 percent of the time. So what we are really de-risking is bias against women.”

Concluding his remarks, President Adesina told attendees that to receive African Development Bank funding, 100% of his institution’s projects and operations must demonstrate what they will do for women.

“It’s not just an issue of money – it’s about equity, it is about fairness, it is about respect,” Adesina said.

“The world has never needed gender equality more. It’s up to us to demand it.” – Hillary Clinton #ActForEqual pic.twitter.com/KLipZxVH5S 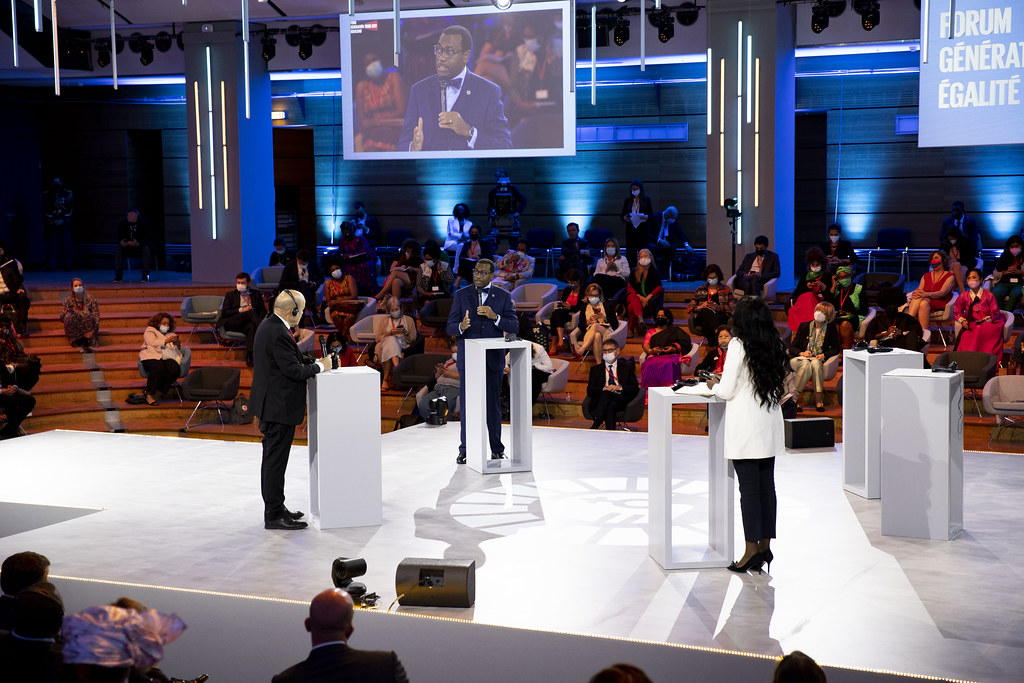