True, most of us agree on the sources of the Ethiopian problem -TPLF (Tigray People Liberation Front) and OLF (Oromo Liberation Front), the sort of problem – division among ethnic groups, and the core cause of the problem -the constitution and ethnic politics. It is helpful to be aware of these three essential elements. What matters is assessing the situation and devising immediate and long-term solutions to the problem. 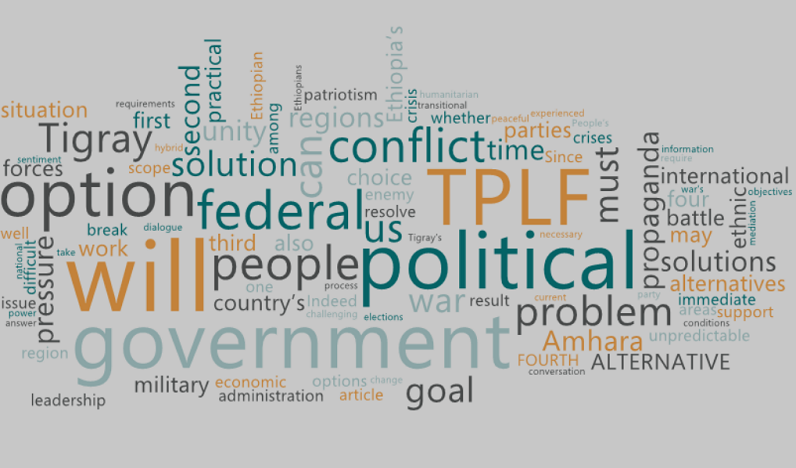 This article focuses exclusively on the severe and immediate crisis we are confronted with, i.e., the war with the TPLF and the nation’s salvation. For the writer, there are four options for resolving Ethiopia’s ongoing political and armed crisis. There are, without a doubt, other options. Anyone with a unique idea can mix it with the ones listed below and blend them for examination and discussion.

Our evaluations of issues and solutions often depend on our emotions and previous convictions. These preconceived notions influence our thinking and make providing an objective solution intractable. If we are lured to answers that tickle our fancy, we will never solve the problem. Since solutions are not always convenient, we must be willing and realistic to pursue the best one. When deciding on a long-term and practical solution to a problem, we must use our sharp intelligence rather than emotions.

Ideas solely based on patriotism and optimism about our aspirations will not yield constructive results. As the problem’s scope expands by the day, neither pessimism nor optimism can provide a solution. Only practical thoughts and actionable steps commensurate with the scope and complexity of the situation will save us.

Since the crisis began, we have been on an emotional roller coaster. Because things are so unpredictable and dynamic, the article’s writer fears some options may be obsolete when this article reaches the readers.

The current situation entails a thorough examination of Ethiopia’s realities and the international community’s maneuvering. The assessment should be conducted with caution and care and should be based on accurate and authentic information. Only then will we be able to come up with a workable goal, and practical answer.

Most Ethiopians, regardless of ethnic extracts, support the popular anti-TPLF campaign. The Ethiopian defense force receives comforting assistance from special forces from all regions and militia groups from Amhara and Afar. The material and psychological support have been remarkable and bringing our unity and common identity to the forefront.

Will this current nationalist sentiment unify us as one patriotic Ethiopian for good? There is no definitive answer, and only time will tell. It is recommended that patriots are rational rather than emotional.

Indeed, nationalism can unite a country and foster unity.  It also has the following drawbacks: Encourages arrogant behavior, leads to a high level of blindness, can lead to social marginalization of minorities, discourages practical political involvement, and replaces critical thinking. Finding the proper solution to the problem will be difficult if we are stuck with these negative characteristics. It is also worth noting, populist politicians and ambitious leaders hide behind patriotism because it protects them from criticism.

Naturally, patriotism thrives in times of war. We should also keep in mind that competing patriotic identities exist, and they can be highly divisive. The best example is the fragmentation of Yugoslavia, which occurred due to competing Serb and Croat identities culminating in the civil war and ended by separation.

“An enemy is not an enemy unless it is defeated” is a famous statement heard among Ethiopians these days. The Ethiopian government reflects this sentiment, albeit it is not official.

The author of this piece earnestly wishes for the TPLF’s demise. The wishes and hoping is for the Tigray people to be free of the persecution of their natural enemy. Moreover, it ensures Ethiopia’s future peace and democracy. Nevertheless, there is no way of knowing whether or not it will occur. Only the Ethiopian federal government has the authority to determine whether the TPLF can be destroyed or not. Even so, “War is a predictable event with an unpredictable result.”-Whitney Paul Allen, Jr.

However, we must recognize that we are fighting against a real adversary that should not be underestimated. The TPLF’s public relations at home and overseas have persuaded the US and the EU of its narratives. Indeed, their propaganda and public relations will not break our will to fight. However, the diplomatic tensions with the United States may stymie our efforts to defeat our opponent in both predictable and unpredictable ways. The influence and impact of the US and the EU on the politics and economy of emerging nations cannot be discounted. The external pressure is inescapable, and the federal government is fighting an uphill battle.

Our propaganda, public relations, and diplomatic operations are, unfortunately, abysmal and inept. Whatever steps we take to comply with some of their demands, they are relentless in their efforts to bring us to a death knell. They have already begun to pressure the federal government based on specific projected outcomes of conflict, incorrect information, and misconceptions. They exert these pressures under the guise of humanitarian considerations, making response difficult.

Because we have a public relations disadvantage, all alternatives for resolving our problems are subject to outside pressure. This shortcoming significantly impacts the sorts, scope, and conditions of solutions we may pursue.

The first alternative is initiating a decapitation strike on the leadership or command and control of the TPLF. The goal of this approach is to defeat the TPLF by removing its military and political leadership.

A broad spectrum of government propaganda should support the resolute military victory. The propaganda effort intends to dispel the TPLF’s false propaganda and develop trust and recognition of the truth in Tigray’s people.

Until the political and security objectives are met, the administration of different Woredas and zones will be in the hands of a hybrid type of transitional government. This hybrid will be formed from well-trusted native people and military officials. The federal government will administer the region and meet all the people’s requirements and extend all services.

The Federal Government organizes regional and representative elections for federal parliament elections in the region during this transition period.

This option is the only one that does not require mediation and peaceful conflict resolution.

The second option is containment.  Its fundamental goal is to build a rift between the Tigray people and the TPLF and allow them to emerge from their menticide state. As a result, the people ultimately grow apathetic and aware of the four decades of misery and poverty they have experienced due to the TPLF political ploy.

This option can be available to the government for four to six months. This time frame is arbitrary. Indeed, it is problematic to tell how Tigray people are physically grappling with the situation and reacting to the TPLF.

*Note: – The first and second alternatives require a dominant military and a readiness to resist international pressure. *

The nation is embroiled in a civil conflict between the TPLF-led minority ethnic group and the rest. This battle will either take a prolonged time to determine an unambiguous winner or lead to a country’s never-ending conflict.

Innocent civilians are slaughtered, and economic infrastructure is destroyed due to the violence in many regions. Western Wollega and Benshangul are the finest examples of the severity of the country’s bloodshed and armed conflict. The territorial and border disputes between the Afar and Somalia areas and the Amhara and Tigray regions are noteworthy. These violent outbursts reveal an unresolved confrontation of ideas, interests, strategies, and methods.

There are political forces whose goal is to secure power by any means necessary, causing turmoil and drama in the process. A handful of them is pursuing a hidden separatist agenda that threatens the country’s unity.

The country is dealing with its own set of profound political, economic, and security issues. It is necessary to break the cycle of crises and develop a national political solution. The third option would be to form a transitional administration composed of all main parties, including the incumbent party.

The war has had a substantial economic and social impact and numerous casualties. The conflict’s legacy will create fresh scars on both sides that will be difficult to repair. As a result, this strategy might be a viable way to avert negative results, recurring crises, and historical hatred.

This option calls for all major political parties to work for national reconciliation and resolve their political disagreements. The conditions for conversation should be more political. Mainly to preserve Ethiopia’s unity and a substantial constitution modification, which has plunged us into a bog of challenges.

Goodwill, serious intention, awareness of the severity of the issue, and sensitivity are required for this process to work. It also requires prioritizing the safety of the people and the country’s unity before political power.

It is an immediate, here-and-now mediation as a solution. Since it is carried out amid armed conflict, it is a challenging option. The other element that makes it more challenging is the opposite objectives and expectations among the parties.

When a war’s goal is achieved, it is proclaimed over. In the battle for law and order, we have only partly brought the TPLF leadership to justice and could not break up the organization. We may have varied viewpoints on whether the war’s final goal was realized or not. For the time being, this is not the most crucial issue.

We are locked in a battle inside a war on disputed areas between the Amhara and Tigray regions, with the TPLF expanding its attack to the Afar region.

If the government intends to resolve this issue, it must first secure the regained areas by Amhara special forces when the conflict started. Second, given the sinister history of negotiations with the TPLF, the federal government should present well-thought-out preconditions. Third, form a team of well-educated and experienced negotiators who recognize the TPLF’s particular character, know negotiating principles, and strategies and work to achieve the desired outcome. At the very least, let the selection of personnel be based on merit rather than party affiliation. Fourth, the administration must brace itself for the expected international community pressure.

A back-and-forth conversation over the prerequisites is inescapable. The African Union would be the best choice for all parties, and it should oversee their pre-dialogue requirements.

*Note: The prerequisites for a peaceful dialogue in the second, third, and fourth choices change due to the differences in each option. *

Lastly, please share your recommended option or choice between the four alternatives mentioned above in the comments section.

The writer could be reached at:  sirakzena98@gmail.com