Former president and dictator of Chad Hissene Habre died on Tuesday in Senegal at the age of 79.

Habre, who was serving a life sentence for crimes against humanity, was taken to a clinic in the capital Dakar ten days ago, where he reportedly caught the virus.

Habre’s rule from 1982-1990 saw an estimated 40,000 people killed, many by his infamous political police who rounded up opponents and held them in secret detention centres.

In eight years, tens of thousands were killed, tortured and raped before he was overthrown.

After a landmark trial in 2016 in Senegal, where he fled after being chased out of office by Sudan-based forces, Habre was sentenced to life in prison for rape and ordering the killing and torture of thousands of political opponents.

The verdict was seen by rights groups as a watershed moment in African justice, as it marked the first time in modern history that a country’s domestic courts have prosecuted the former leader of another country for crimes against humanity.

It also capped a 16-year battle by victims and rights campaigners to bring the former Chadian autocrat to justice.

Prior to that however, Habre had enjoyed a life of relative luxury in Senegal for over two decades, escaping from Sudanese forces in 1990 and living off his millions in exile. 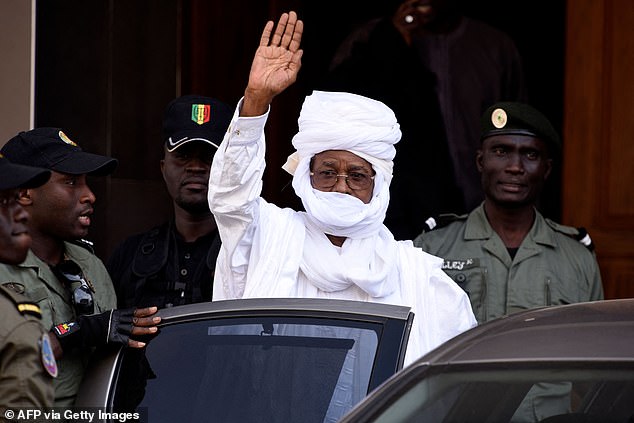 Habre’s rule from 1982-1990 saw an estimated 40,000 people killed, many by his infamous political police who rounded up opponents and held them in secret detention centres 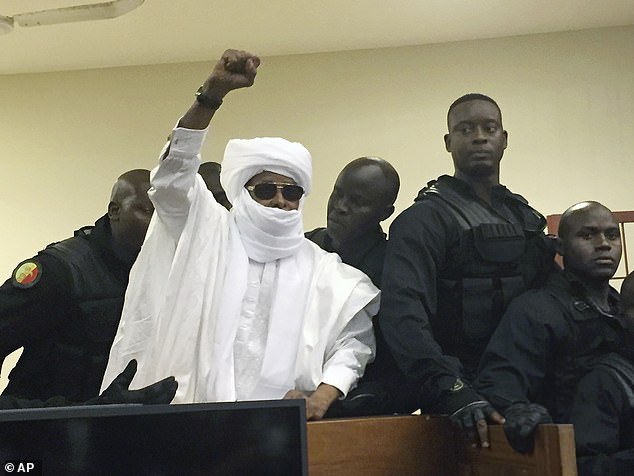 Habre steadfastly denied his role in the killings. At the start of his trial in 2015, he had to be carried into court in his long white robes, and restrained by masked security guards 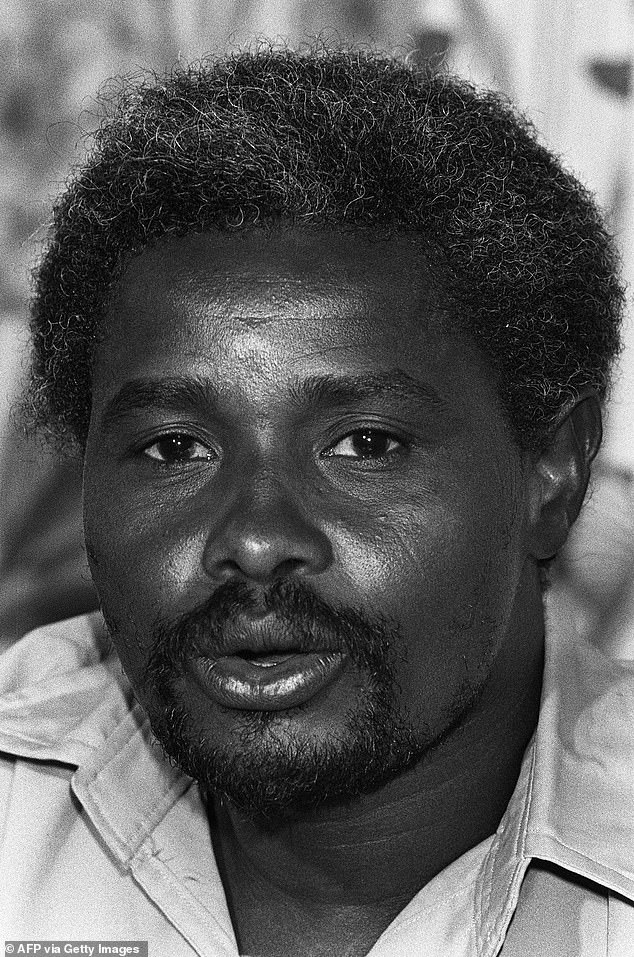 In eight years, tens of thousands were killed, tortured and raped before he was overthrown (Pictured: Habre in 1980)

Habre was bornin the northern Chadian town of Faya-Largeau in 1942.

The country was still under French colonial rule at the time, and Habre worked as a civilian for the French military before earned a law degree in France.

He returned in 1971 to work for Chad’s foreign affairs ministry and became prime minister under then-president Felix Malloum in 1978, who fell from power the following year.

‘Hissene Habre will go down in history as one of the world´s most pitiless dictators,’ said Reed Brody, a Human Rights Watch lawyer and part of the International Commission of Jurists, who has worked with Habre’s victims since 1999.

‘Habre was a man who slaughtered his own people, burned down entire villages, sent women to serve as sexual slaves for his troops and built clandestine dungeons to inflict medieval torture on his enemies.’

His reputation for bloodlust earned Habre the nickname of ‘Africa’s Pinochet’ in reference to the Chilean dictator.

Meanwhile, there are still some in Chad who supported Habre. The head of Chad’s ruling military junta, Mahamat Idriss Deby Itno, offered his ‘sincere condolences’ to Habre’s family ‘and the Chadian people.’

‘To God we belong and to Him we return,’ Deby said on Twitter, while Ali Younouss Mahamat, a 30-year-old teacher in the Chadian capital N’Djamena, said Habre was a ‘fair and honest statesmen who fought against corruption.’

Habre steadfastly denied his role in the death of thousands of his countrymen.

At the start of his trial in 2015, he had to be carried into court in his long white robes, and restrained by masked security guards.

He shouted ‘Shut up! Shut up!’ when the clerk read out his indictment.

Despite his lamentable reputation, Habre enjoyed support as a Western ally during his time in office.

France and the US in particular supported his grip on power as they were fearful of Muammar Gaddafi’s plans to expand out of the neighbouring Libya.

That support waned as Habre faced growing resistance from armed groups, including his eventual successor Idriss Deby, who attacked from Sudan and eventually overthrew the dictator. 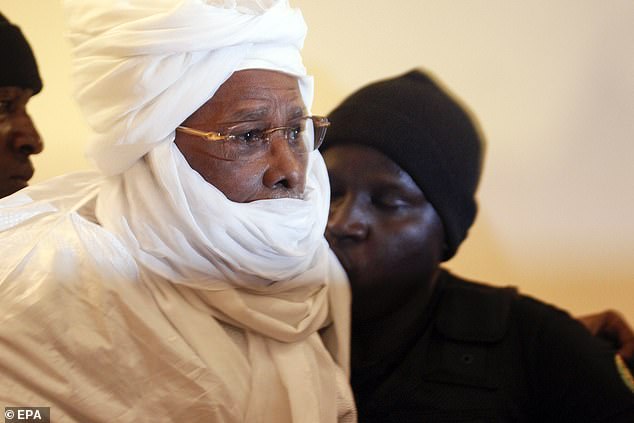 Habre was sentenced to life in prison in 2016 for crimes against humanity, including rape and ordering the killing and torture of thousands of political opponents 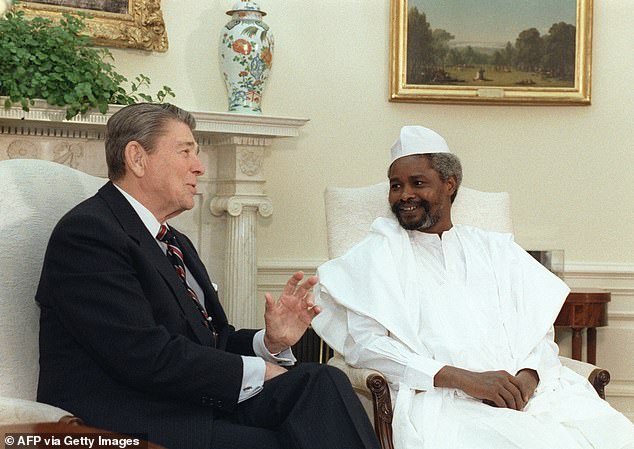 In this 1987 photo, President Ronald Reagan talks with the then Chadian President Habre in the White House Oval Office. Despite his crimes, he enjoyed support from Western countries during his rule, particularly from the US and France

In 2000, a group of victims filed a complaint against Habre in Senegal and a court charged him with torture and crimes against humanity, but an appeals court ruled he could not be tried in the West African country.

After another group of victims came forward in Belgium, the country issued an international arrest warrant in 2005 holding Habre responsible for mass murder and torture.

Senegal declined to extradite Habre and the African Union asked it to pass legislation giving its courts jurisdiction for foreign crimes.

It was not until Senegal President Macky Sall took office in 2012 that the process picked up speed.

In 2013, the Extraordinary African Tribunal was created and Habre was arrested, before being convicted and handed a life sentence in 2016.

Until that point however, Habre had enjoyed a life of relative luxury in Senegal, and Reed Brody wrote earlier this year that ‘torture survivors and families of the dead have not seen one penny’.

‘The African Union has failed even to establish the court-mandated trust fund to search for Habre’s assets and solicit contributions,’ Mr Brody wrote.

‘The Chadian government, ordered by its own court to erect memorials and compensate victims, has also turned its back on them.’ 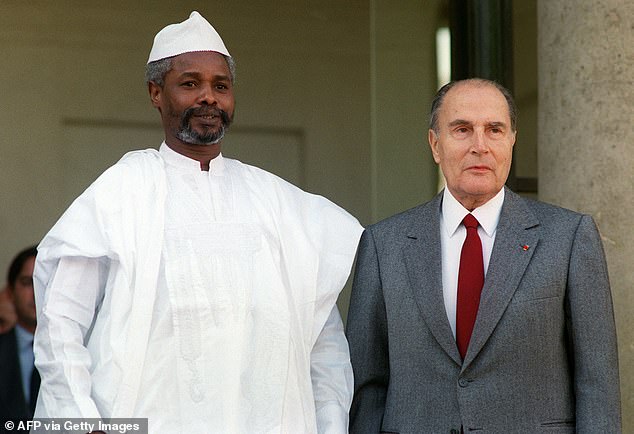 French president Francois Mitterrand welcomed Habre at the Elysee palace in France in 1989 before he was overthrown. Habre obtained a law degree in France before moving back to Chad and becoming involved in government 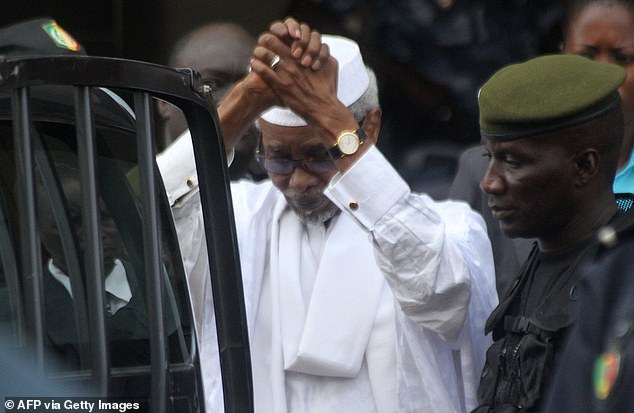 Though he was eventually sentenced in 2016, Habre spent years in relative luxury during his exile in Senegal after fleeing from Sudanese forces in 1990