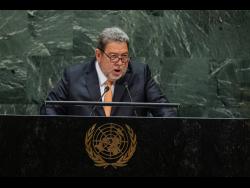 As a young businesswoman with dreams of expanding her reach across the region, Patrique Goodall has felt let down by the Caribbean Community (CARICOM) for a very long time.

The owner and operator of the tea company Likkle Tea, the 31-year-old Goodall had the romantic notion of the regional integration movement as an open trading area that allows free, easy, uncomplicated and inexpensive access to the key Caribbean markets, including Trinidad and Tobago, where, on July 4, 1973, CARICOM was born.

After all, she grew up during the period when the grouping was revising the Treaty of Chaguaramas, and by the time she entered her teenage years, the CARICOM Single Market and Economy had been established.

However, as the 15-member grouping struggles to reach common ground on important matters such as foreign policy and trade, and as decisions reached at heads of government meetings seem to atrophy and die once the meetings are over, it’s no surprise that the young Jamaican professional continues to be frustrated by the institution for which she has so much passion.

“CARICOM means a lot of things for me, and a lot of it for me is frustration more than anything else,” the Montego Bay-born, Kingston resident told The Sunday Gleaner. “What could be if we all had one trading currency? What if we had one solid economic block to trade? I’d really love to support the region, but it’s cheaper for me to ship my items to Miami than to ship it to Trinidad or Barbados. There are just so many barriers to having a true single economy.”

The wailing about CARICOM and its inability to deliver is not new, with the voices of doom, despair and downright defeat growing louder over the years. More than a decade ago, as leaders prepared for their 31st summit in Montego Bay in July 2010, The Gleaner, in an editorial, called for disbanding the community “and allow its 15 members to find their own way in the world. Or, if they desire, form alliances with alternative trade and economic organisations.”

The paper was careful to state that it had not come to its decision lightly, as the concept and treaty remained “an excellent idea”. While there had been some successes, mainly on the political front, it said, on the application of the treaty, “for nearly four decades, we have failed”.

Ahead of that Montego Bay summit, Dr Ralph Gonsalves, the prime minister of St Vincent and the Grenadines, had also complained about “a serious lack of leadership” in CARICOM. More than 10 years later, Dr Gonsalves’ son, Camillo Gonsalves, the minister of finance, economic planning and information technology, repeated those very words as he declared in a March 8, 2021 blog that “the idea of CARICOM” had died, leaving behind a “decomposing corpse” in the middle of the integration movement.

“We have not been having serious leadership in CARICOM,” the younger Gonsalves wrote in his blog.

Defenders of CARICOM point to successes such as the Caribbean Disaster Emergency Management Agency, the Caribbean Examination Council and the Caribbean Court of Justice, and the conclusion of several trade agreements with third countries and regions, such as the African Union and Europe, as great examples of its legacy, and insist it remains the most important forum for regional cooperation.

However, to the average citizen, all of this is in the distant past and the community is a dream that has become a nightmare, sacrificed at the altar of egos of leaders who display a sad absence of political will to act in the best interest of the entire region.

Many refer to the inability to achieve complete freedom of movement, the high cost of travel across the region, an unhealthy concentration of power in the hands of the political leadership; and the tendency of the larger countries to thumb their noses at the smaller ones as signs that the community is a waste of time.

These are long-running problems that continue to this day, argued Basdeo Panday, who served as prime minister of Trinidad and Tobago from 1995 to 2001.

“CARICOM today is no different from what it was when I was prime minister,” Panday told The Sunday Gleaner in an email exchange. “CARICOM, as an economic organisation, the object of which is to promote trade between its members, is not viable. Most of the member states, with the exception of Trinidad and Tobago and Guyana, produce the same product – tourism – and must compete with one another. To be a viable trading block, the member states must be producing different products, so that trading between them is profitable to all.”

These also are among the major issues that the new secretary general, the Belizean Dr Carla Barnett, must grapple with.

Barnett assumes duties officially tomorrow, following an installation ceremony at which she is expected to outline her vision for the institution, although she has said she wants to see “a CARICOM that the ordinary woman and man will defend because they feel the impact in their daily lives through economic and social advancement that comes from community action”.

She is the first woman to be appointed to the post, although Lolita Applewhaite of Barbados acted in the position in the interim between the departure of Edwin Carrington and the appointment of Irwin Larocque, who Barnett is succeeding.

Barnett is no stranger to the community, having served as its first female deputy secretary general from 1997 to 2002; and Mia Mottley, Barbados’ first female prime minister and a former CARICOM chairman, said Barnett was “perfect for the job in the region at this time, when economies have collapsed and what we need is a sound economist to lead us on a path to growth”.

However, Basdeo Panday, the former Trinidad prime minister, believes nothing will change with Barnett’s elevation to the top regional post.

“I do not think that the appointment of Carla Barnett will make a difference to the stated objective of the organisation, which is profitable trading arrangements,” he contended.

At 63, Barnett’s age has raised eyebrows among some regional observers who believe that the heads of government missed an opportunity to engage a younger Caribbean professional to bring fresh energy and dynamism to the community.

“Maybe we have to find another generation of major technocrats in a different kind of mould,” Tony Fraser, an experienced regional and international journalist who has covered CARICOM for several decades, told The Sunday Gleaner. “This is the age of technology, so maybe we need to look in that direction for someone in that area.”

However, according to Panday, “The age of the dear lady is of no consequence, the failure of CARICOM is because it was ill-conceived.”

Teocah Dove, 33, an international development professional who works in communications, artificial intelligence and sustainable development with various development organisations in the region, also disagrees, arguing that with a number of young professionals employed at the secretariat in Georgetown, Guyana, Barnett’s experience is needed at this period of economic strain due to the COVID-19 pandemic.

“Even though she’s 63, I appreciate her experience in economics, her finance and development experience through the years, and for me, I am looking more at what the organisation needs, what member states need at this time, and she has the capacity for what is needed,” Dove told The Sunday Gleaner. “With such people who are working tirelessly to advance this region, I know once she has an open mind, the genius is there, the innovators are there, everyone is there to really transition and carrying forward our region.”

When Larocque took over as the region’s top public servant 10 years ago, he, too, was an experienced member of the team, having worked as assistant secretary general for trade and economic integration at the secretariat since 2005.

At 56, he was seven years younger than Barnett currently is at the time of assuming the position, and he was supposed to be “a mover and a shaker, but he didn’t”, stated Peter Wickham, a Barbadian political consultant and former lecturer in political science and research methods at The University of the West Indies (UWI) Cave Hill’s department of government.

According to Wickham, Barnett is a safe bet to maintain the status quo, but will be no more than a transitional secretary general, allowing the leaders to satisfy the requirement to appoint both a woman and someone from Belize before turning to someone younger in a few years’ time.

“The good thing about putting [Barnett] is that … she will basically give them an opportunity to make the appointment in another few years. My sense is it’s a transitional type of position that they’re looking at,” Wickham told The Sunday Gleaner. “That’s my reading of it because frankly, I don’t see her as being developmental, I see her as being more transitional because she’s not gonna go there and be a mover and shaker.”

The former UWI lecturer’s pick is Jamaican Pamela Coke-Hamilton, executive director of the International Trade Centre – a joint agency of the United Nations Conference on Trade and Development and the World Trade Organization.