TEHRAN, Iran — Iran, grappling with its most severe surge of the coronavirus to date, reported more new infections and deaths across the country on Sunday than any other single day since the pandemic began.

Health authorities logged over 39,600 new cases and 542 deaths from the virus. The fatality count shatters the previous record set during Iran’s deadliest coronavirus surge that gripped the country last November, signaling the current wave will likely only get worse. The new all-time highs push Iran’s total number of infections over 4.1 million and death toll over 94,000 — the highest in the Middle East.

The crush of new cases, fueled by the fast-spreading delta variant, have overwhelmed hospitals with patients too numerous to handle. The country has never seen so many covid-19 patients in critical condition, with 6,462 more severe cases reported Sunday.

Supreme Leader Ayatollah Ali Khamenei, who has the final say on all state matters, last week ordered officials to discuss the possibility of a total national shutdown. The government has been loath to enforce such a lockdown, fearing the damage it would do to an economy reeling from years of American sanctions.

Iran’s sluggish vaccination campaign hasn’t helped matters. Only 3.3% of the total population of some 80 million has been fully vaccinated, according to data compiled from government sources by the Our World in Data project at the University of Oxford.

In the face of U.S. sanctions that complicate banking transactions and deep-rooted suspicion of the West, Iran has vigorously promoted the local production of coronavirus vaccines, doling out the experimental COVIran Barekat vaccine to most health care workers. Iran’s government announced that its domestic vaccine provides 85% protection from the coronavirus, without disclosing data or details.

The covid-19 pandemic has reduced the number of visitors to Zimbabwe’s Victoria Falls, where the roaring Zambezi River tumbles more than 350 feet down to the gorge below, to a trickle.

Ordinarily, Victoria Falls attracts 350,000 tourists a year, but their numbers have dropped to almost none as a result of travel restrictions.

Hotel occupancy rates fell into the single digits during 2020 and the first half of 2021, and some hotels were forced to close, according to the Hospitality Association of Zimbabwe.

To promote Victoria Falls as a safe destination, President Emmerson Mnangagwa’s government in March, at a time when only medical workers and other essential workers were eligible for vaccines, shots were made available for all residents age 18 and older of the town that shares a name with the waterfall.

An estimated 60% of the people there have been vaccinated with either the Sinopharm or Sinovac vaccines, both from China.

Victoria Falls was where Zimbabwe recorded its first covid-19 case in March 2020, likely because of its high number of international visitors.

Although tourists have not returned in large numbers, Victoria Falls mostly has been spared the current wave of covid-19 that has swept across the rest of Zimbabwe and southern Africa, which health officials attribute to the town’s relatively high level of vaccinations.

Nationwide, over 1.8 million people, slightly more than 12% of Zimbabwe’s population, have received a first dose, while more than 900,000 people are fully vaccinated with two doses.

On the strength of the vaccination rate in Victoria Falls, the government last week reopened two land borders that link the town to the neighboring countries of Zambia, Namibia and Botswana. Travelers with proof of vaccination and a negative covid-19 test will be permitted entry.

All adult Zimbabweans are now eligible for the vaccine, but because of widespread supply shortages, the lines for jabs are long and many people are disappointed.

Restaurants in Victoria Falls are allowed to serve sit-in customers — something that is forbidden in the rest of Zimbabwe, which still has tight restrictions as a result of the current surge driven by the delta variant of the coronavirus. Close to 90% of covid-19 hospitalizations and deaths in the current surge are of unvaccinated people, according to a recent report by the Ministry of Health.

Although planeloads of tourists have not yet returned, the reopening of Victoria Falls was a relief for a town that survives on tourism, Anald Musonza, the regional chairman of the Hospitality Association of Zimbabwe, said.

“We had been waiting for this for a long time,” Musonza said. “This will help us retain some jobs that were lost due to the pandemic.”

Tourism, together with mining and agriculture, is a key anchor of Zimbabwe’s economy.

Mass vaccinations could help open up tourist destinations countrywide, said Tinashe Farawo, a spokesperson for the Zimbabwe National Parks and Wildlife Management Authority. The loss of tourism revenue has hurt the authority’s ability to operate.

“Victoria Falls is testimony of what vaccines can do,” he said. “It’s good for us. It’s good for wildlife because now we can raise money to deploy our rangers and fund other critical operations.”

Ghana has received 177,600 Johnson & Johnson single-shot covid-19 vaccines, the first of its monthly supplies under an arrangement with African Union nations.

The West African nation is one of the earliest to benefit from a supply deal agreed in March to procure 220 million doses for the continent, with the potential to order another 180 million. African Union’s 55 members aim to distribute 6.4 million shots in August, the bloc’s African Vaccine Acquisition Trust said in an emailed statement.

Ghana is among the first in the region to receive the single-shot vaccines that were manufactured in Africa, Minister of Health Kwaku Agyeman Manu said in the statement. The country has administered more than 1.2 million vaccine doses, with about 865,000 recipients awaiting their second jabs, President Nana Akufo-Addo said last month.

African Union’s agreement with Johnson & Johnson was made possible by a facility of $2 billion from the African Export-Import Bank, according to the statement.

Information for this article was contributed by Farai Mutsaka of The Associated Press and by Moses Mozart Dzawu of Bloomberg News (TNS). 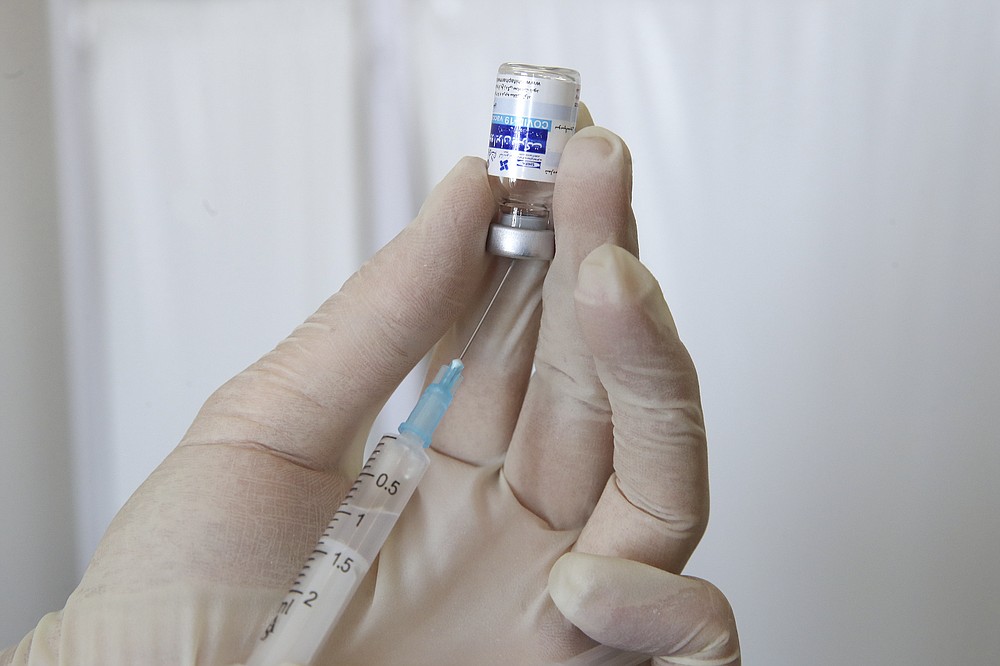 In this photo released by the official website of the office of the Iranian Presidency, a medic prepares a shot of the COVIran Barekat Covid-19 vaccine for President Ebrahim Raisi, in Tehran, Iran, Sunday, Aug. 8, 2021. On Sunday, Iran reported more new infections and deaths across the country than on any other single day since the pandemic began. In the face of U.S. sanctions that complicate banking transactions and deep-rooted suspicion of the West, Iran has vigorously promoted the local production of coronavirus vaccines, doling out the experimental COVIran Barekat vaccine to most healthcare workers. (Iranian Presidency Office via AP)