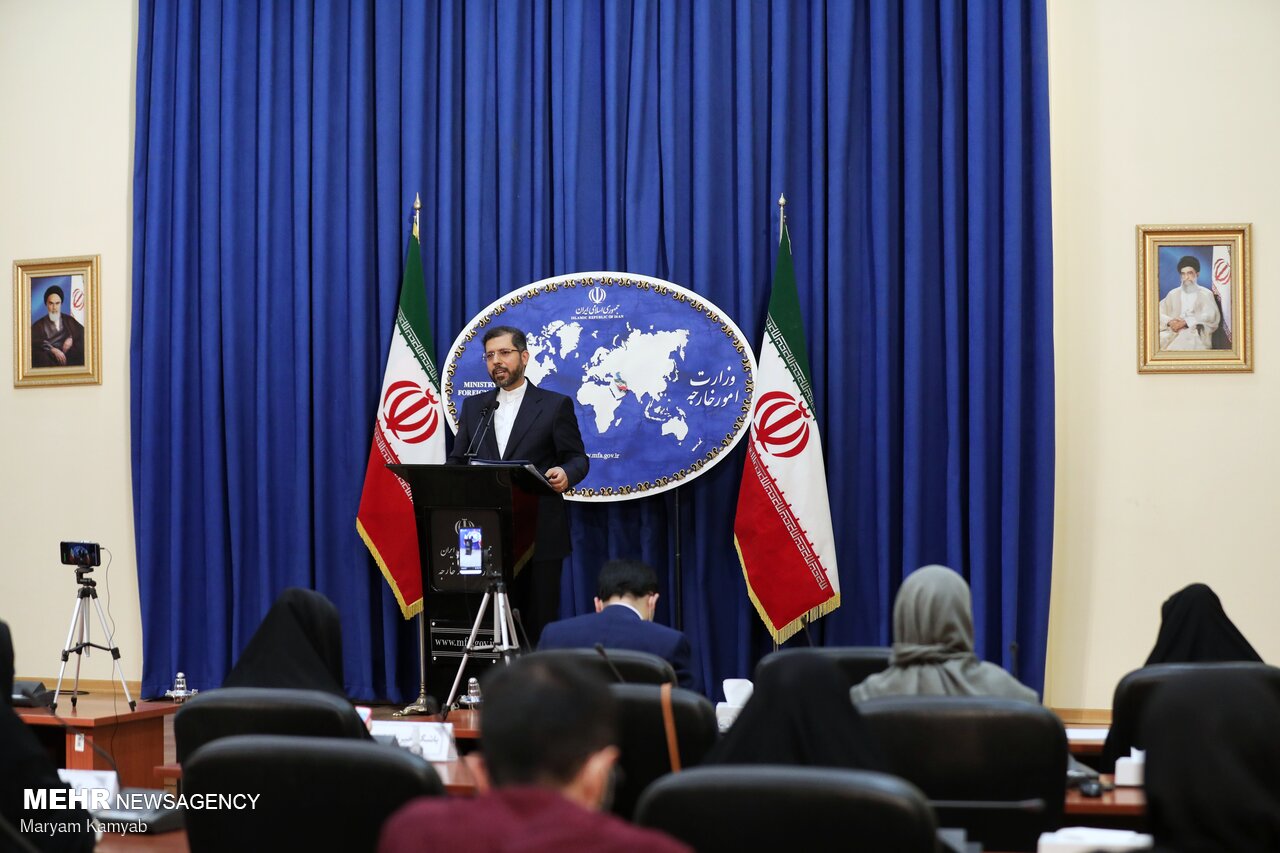 Speaking in his weekly press conference, Saeed Khatibzadeh answered questions on a wide range of topics.

Iran’s position on JCPOA, lifting of sanctions not to change with change of administration

Regarding the position of some Western officials on the need to wait for the new administration of the Islamic Republic of Iran, Khatibzadeh said, “Iran’s position on the JCPOA and the lifting of sanctions is one of the principled positions of the Establishment and will not change with the change of administration.”

“Therefore, if an agreement is reached, the administration of Mr. Raeisi will be loyal to it, because contrary to the approach of some other parties, adherence to the given commitments and promises is always a principle for the Islamic Republic of Iran,” he added.

“The progress made in the Vienna talks is a fact acknowledged by all parties to the talks, although there are still important issues that largely need to be decided by the other parties, especially the United States. In fact, the finalization of the agreement to revive the JCPOA depends on the political will of the other parties to make tough decisions on their part,” the spokesman said on the progress of the negotiations.

He went on to say, “Iranian delegation seeks to reach an agreement as soon as possible and to lift the oppressive sanctions against the Iranian people. However, we do not set any deadline for reaching an agreement that serves the interests of the Iranian people. Negotiations will continue until a favorable agreement is reached for Iran. As has been said many times, we are in no hurry to reach an agreement, but we will not allow the negotiations to become protracted.”

Iran has no intention of interfering in internal affairs of Iraq

In response to a question about the claim published in some Western media that the United States was sending a message to Iran about the recent attacks on Syria and Iraq through diplomatic channels, Khatibzadeh said, “The Islamic Republic of Iran has always emphasized that the language of force and threat will not be of any use for the security of the region. The United States must realize that its regional goals will not be achieved by bullying but rather, its situation in West Asia will be aggravated.”

Emphasizing that Iran has no intention of interfering in the internal affairs of Iraq, he added, “The repeated and announced attacks by the United States against the positions of the Iraqi and Syrian forces on the border between the two countries are only to hit the main deterrents of ISIL members and to strengthen the remnants of this terrorist organization.”

In reaction to the intention of the Zionist regime to apply for the position of observer member in the African Union, the FM spokesman expressed deep concern and strong opposition of the Islamic Republic of Iran to such a move.

In order to demonstrate their political determination to adhere to the Palestinian cause, he called on African Union member states to respect the decisions of important international organizations such as the Organization of Islamic Cooperation to oppose any action to grant membership or positions to the occupying regime in international and regional organizations.

“Yousef bin Ahmad Al-Othaimeen, the Secretary-General of the Organization of Islamic Cooperation in a letter to Foreign Minister Mohammad Javad Zarif, while expressing gratitude for the commitment of the Islamic Republic of Iran to the principles of the Organization of Islamic Cooperation and our country’s support for joint action of Islamic countries on issues related to the Islamic Ummah, has expressed deep concern over the news received from some official sources that the Zionist regime intends to apply for an observer position in the African Union (AU),” Khatibzadeh noted.

“The establishment of an observer position for the Zionist regime in the African Union will encourage the regime to continue its colonial and racist policies, and to carry out military strikes and commit more crimes against the Palestinian people,” he added.

Iran looking at negotiations with Saudi Arabia in a positive light

In response to a question about the position announced by the Minister of Foreign Affairs of Saudi Arabia that the country welcomes dialogue with Iran and his emphasis on the need to prove the commitment of the Islamic Republic of Iran to ensure security and stability in the region, Khatibzadeh said, “Saudi officials should know that the Islamic Republic of Iran, based on its principled positions, has always wanted the countries of the region to maintain peace and security in the Persian Gulf region.”

“This approach has helped to end the dominance of ISIL and other terrorist groups in Iraq and Syria and to prevent the infiltration of takfiri groups into the countries of the Persian Gulf,” he added, stressing, “We have always welcomed dialogue to achieve positive results and we look at the negotiations with Saudi Arabia in a positive light.”

“Accordingly, the Islamic Republic of Iran has followed the model of 3+3 in its diplomatic movements at the regional level,” he added.

“Iran has close relations with the three Caucasus countries, Russia and Turkey, so it can take the first steps towards this cooperation,” Khatibzadeh stressed.