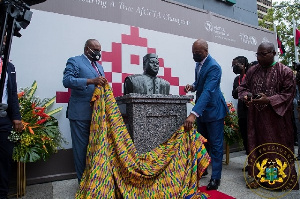 Secretary-General of the African Continental Free Trade Area (AfCFTA) Secretariat Wamkele Mene has called on African leaders to re-double their resolve to forge ahead with economic integration of the continent.

According to the Secretary-General much work remains ahead in the implementation of the AfCFTA.

To date, 54 countries have signed the free trade agreement and 40 countries have ratified it, making this the fastest ratification in the history of the African Union.

Although the agreement has a viable market of 1.3 billion people, with a combined GDP that is projected to be close to $8 trillion by the year 2035, critiques have raised concerns that the integration project may take longer than anticipated due to a lack of adequate infrastructure across Africa.

But Mr. Wamkele Mene says “There will be challenges that may seem unsurmountable, it is at that point that we should re-double our resolve to forge ahead with economic integration of our continent.”

He made the remarks at a ceremony held in Accra in honour of President Issoufou Mahamadou – Leader and Champion of the African Continental Free Trade Area (AfCFTA) and Former President of the Republic of Niger.

“President Mahamadou, through your efforts of advancing Africa’s economic integration, you are in a position to answer this question in the affirmative. Today we engrave your legacy in the annals of Africa’s history, as a true son of the soil who made his contribution to advancing the noble ideals of Pan-Africanism. This is your legacy to African humanity” Mr. Wamkele Mene said while adding that “standing on the shoulders of the visionary leaders of the OAU, we have positioned our continent for economic transformation and the ability to secure Africa’s prosperity in the years ahead.”