Heads of state of the Southern African Development Community (SADC) met in Malawi’s capital Lilongwe for the Ordinary Summit of SADC Heads of State and Government.

The 41st Ordinary Summit met to discuss bolstering economic cooperation in the face of the Covid-19 pandemic, as well as issues of regional insecurity.

In the communique published, the regional bloc rallied together in its condemnation of the African Union’s decision.

South Africa had played a “central role” in lobbying SADC’s 16 member states to issue a collective statement, said Clayson Monyela, spokesperson for the Department of International Relations and Cooperation.

“It is significant when you have a regional body of the African Union speaking in one voice on such a matter. It carries weight,” said Monyela.

AU member states have previously rejected Israel’s applications, but the latest decision had bypassed the collective debate, explained Monyela. This is why SADC was critical of what it called a unilateral decision by the African Union Commissioner. 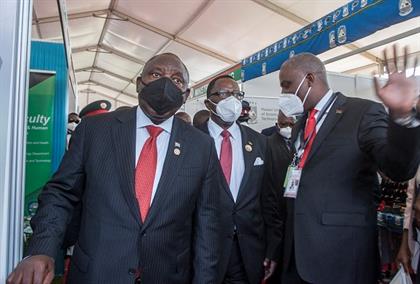 AU Commissioner Moussa Faki Mahamat defended the decision earlier this month, saying it reflected the position of the majority of member states. The observer status allows non-members like Israel to participate in certain activities of the AU.

Faki Mahamat added that accepting Israel’s formal accreditation at the AU did not dilute the “unflinching commitment of the Pan-African Organisation to the fundamental rights of the Palestinian people, including their right to establish an independent National State, with East Jerusalem as its capital, within the framework of a global, fair and definitive peace between the State of Israel and the State of Palestine”.

He said the objection by certain members would be discussed at the session of the executive council to be held in October.

In July, Israel announced the formal establishment of its observer status with the African Union.

It was the first time since 2002 that an Israeli diplomat had presented their credential to the regional body’s commission in Addis Ababa.

“This is a day of celebration for Israel-Africa relations,” Israel’s Minister of Foreign Affairs Yair Lapid said at the time. “This corrects the anomaly that has existed for almost two decades and is an important part of strengthening the fabric of Israel’s foreign relations.”

But, South Africa’s foreign ministry responded with immediate condemnation. Dirco said it was “appalled at the unjust and unwarranted decision”. It was a “shocking” decision taken in a year of heightened conflict between Israelis and Palestinians, which the AU had condemned at the time.