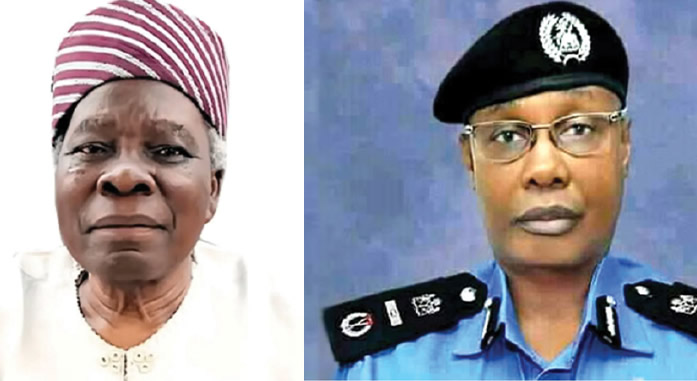 JESUSEGUN ALAGBE looks at the weakening capacity of the police and other security agencies to handle protests as demonstrated in the alleged oppression, intimidation, harassment, and killing of protesters in the country in recent times

Without freedom of mind and of association, a man has no means to self-protection in the social order, said Harold Laski, an English political theorist and economist who served as the chairman of the British Labour Party from 1945 to 1946 and was a professor at the London School of Economics from 1926 to 1950.

Laski’s thoughts on the citizens’ freedom of association or assembly also aligned with those of the late Sir Abubakar Tafawa Balewa, the first and only Prime Minister of Nigeria, who at the opening of the first International Labour Organisation African Regional Conference in Lagos in 1960, said “freedom of association is one of the foundations on which we build our free nations.”

The concept of freedom of association is widely acknowledged as a fundamental right in international law, and indeed, Section 40 of the Nigerian Constitution gives every Nigerian the right to assemble freely and associate with other persons to protect their interests.

Also, the Universal Declaration of Human Rights adopted by the United Nations General Assembly in 1948, of which Nigeria is a signatory, proclaims that “everyone has the right of freedom of peaceful assembly and association.”

Nigeria is also a state party to the 1966 International Covenant on Civil and Political Rights. Article 21 of the ICCPR provides that the right of peaceful assembly shall be recognised and that no restrictions may be placed on the exercise of this right.

The right to peaceful assembly is also guaranteed under Article 11 of the African Charter on Human and Peoples’ Rights of 1981, which binds Nigeria as well as other African Union member countries.

During times of peaceful assembly, which could be in the form of protests, both the Nigerian constitution and other international laws perspicuously specify the role of the police to include facilitating the enjoyment of the right of peaceful assembly.

According to the 1990 United Nations Basic Principles on the Use of Force and Firearms by Law Enforcement Officials, in the dispersal of assemblies that are unlawful but non-violent, law enforcement officials shall avoid the use of force or, where that is not practicable, shall restrict such force to the minimum extent necessary.

In the dispersal of violent assemblies, the UN law states that a law enforcement official may only use a firearm against a specific individual where this is necessary to confront an imminent threat of death or serious injury or a grave and proximate threat to life.

But time and time again, the police and other security operatives in Nigeria have allegedly demonstrated oppressive acts against protesters by way of oppression, intimidation, and harassment.

Rather than perform the duty specified by national and international laws, the police and other agencies have carried out acts that are believed to be inimical to the political development of the country through unlawful arrests and sometimes the killings of peaceful protesters.

One of the latest incidents was the death of a salesgirl, Jumoke Oyeleke, who was allegedly killed by a stray bullet during a Yoruba Nation rally in Lagos two weeks ago.

Agitators for the Yoruba Nation had gathered at the Gani Fawehinmi Park in Ojota that Saturday amid the presence of armed policemen and soldiers.

Oyeleke, 25, who displayed soft drinks at her employer’s shop located in a compound close to the rally ground, was hit by a stray bullet when security men chased some agitators into the premises.

She died on the spot. This incident among others showed the waning capability of the police to control protests, according to analysts who spoke with our correspondent.

“The police should be deft when deployed to protest grounds. The authorities should deploy officers who have sound training in crowd dispersal and arms handling,” said a former presidential candidate of the Grassroots Development Party of Nigeria and ex-Intelligence Officer with the Nigerian Army, Dr Davidson Akhimien.

Akhimien said anxiety or fear of being overwhelmed by the crowd could be factors that make some police officers use weapons during a protest.

However, while canvassing training for police officers in handling crowds, he said a well-trained police officer wouldn’t fire a single shot or tear-gas during a protest.

Akhimien noted that a well-trained police officer with good human relations could even quell a protest without weapons but with words alone.

“Such a police officer can speak to the psychology of the protesters and they will listen. So, crowd dispersal requires specialised training and only officers who have been trained in it should be deployed to protest grounds,” he said.

The ex-presidential candidate also tasked police authorities to identify trigger-happy or bloodthirsty personnel and sieve them from those to be deployed to protest grounds.

“But generally, crowd dispersal should be part of training every police officer undergoes,” he said, adding that “there is a chain of command, and an officer should not act unilaterally by firing a gun during a protest without his commander’s order.”

Noting that protest is a fundamental right of the citizens, Akhimien however said should the government desire a protest not to hold, it should make the reason known publicly before the day of the protest rather than suppress it.

“The government has enough reasons to quell any protest, but it should not use its monopoly of violence in a manner that is detrimental to the lives of its citizens,” he said.

Despite Akhimien’s submission, there have been several instances when the government alongside its security agencies allegedly used its monopoly of violence to unleash fatal attacks on protesters.

For instance, the alleged killings of several #EndSARS protesters at the Lekki tollgate in Lagos on October 20, 2020 will perhaps be forever etched on the hearts of many a Nigerian.

On that day, Nigerians reportedly saw via a live-streamed social media video how persons dressed in military camouflage fired shots at unarmed flag-waving protesters whose crime was protesting against police brutality and bad governance.

On June 19, 2021, the Chief Pathologist of the Lagos State University Teaching Hospital, John Obafunwa, submitted the autopsy documents of 99 deaths allegedly resulting from the #EndSARS protests to the Lagos Judicial Panel of Inquiry.

According to Obafunwa, the 99 bodies, which include three allegedly killed at the Lekki tollgate during the shooting on October 20, 2020 by soldiers, were deposited at the morgue between October 19 and October 24, 2020.

Even journalists have in recent times become victims of police shooting at protest grounds.

One of such victims was Precious Owolabi, a reporter with Channels Television in Abuja, who on July 22, 2019, was allegedly killed by the police while covering a protest by members of the Islamic Movement in Nigeria.

Also, on October 24, 2020, Pelumi Onifade, an intern reporter who was covering the #EndSARS protests for online television channel, Gboah TV, was attacked by security officers and carried away alongside a mob arrested by the Lagos State Task Force.

About a week later, his corpse was found in a mortuary in Ikorodu, Lagos, with his family lawyer alleging that Onifade’s body had bullet wounds. The deceased was a 200-level student of the Department of History at Tai Solarin University of Education, Ogun State.

‘No solution without proper recruitment’

Prof Onuoha Oliver of the Department of Political Science, University of Lagos, doubted if the current crop of officers in the police force could be trained to stop attacking and killing protesters.

He said the way forward was to recruit the “good people of society” into the police.

He said, “Where to start is at the point of recruitment. There is nothing you can do to the police who are already in the force because they already have certain ideologies like calculating how much they will make on the road per day. You can’t control officers with such ideologies.

“Who do we recruit into the force? Are they those who failed the West African Senior School Certificate Examination and felt the way out for them was to join the police, or those who are angry at and embittered towards society? Or thieves or armed robbers who want their people in the police or army so they can be protected when they are arrested? Do the police care about those they recruit?

“And then, how do you train them? How many police officers know the rights of the citizens? Do they even understand what the word ‘citizen’ means? Because when you understand who a citizen is, you will treat them with respect, no matter what their social status is.”

Oliver however canvassed adequate funding and welfare of the police for them to uphold human rights especially during times of protest.

“The police must be well-funded if we want them to give us the best. For instance, there was a TV documentary run by one of the stations which showed various police training schools.

“I’m sorry to say this, but the truth is some of the training schools looked like sties. When you train people at such places, you don’t expect them to react favourably to society. They will feel hatred towards the society,” the don said.

The Executive Director, Civil Society Legislative Advocacy Centre, Mr Musa Rafsanjani, said it was clear that the Federal Government had not invested in human development and capacity building for security personnel.

He said, “In some parts of the world, security personnel get constant training in crime prevention and ensuring peaceful coexistence. Unfortunately, the mentality that Nigeria’s security operatives have towards the citizens is oppressive and repressive.

“When there is a protest, the security operatives forget that they are not in a combat or war zone. They are supposed to inculcate human and community relations in their approach. They must perform the role of peacemakers. Intimidation and harassment of protesters are not among the features of civilised or modern policing.”

On how the police and other security agencies could develop strategies that could help them in controlling protests, Rafsanjani said the operatives must learn how to create trust with the people.

He said, “Security operatives, especially the police, should create trust between them and the people. Because of the lack of trust and poor handling of issues like protests, it has become difficult for the people to appreciate the work the police are doing.

“During protests, what we’ve seen so far is that the security agents are not out to protect the protesters but the government’s interests. Modern police will do both.”

Rafsanjani added that apart from flouting fundamental human rights, the police were also fuelling distrust between them and the people with the way they handle protests in the country.

Also speaking with Saturday PUNCH, the Chairman and Chief Executive Officer, Justice and Equity Organisation, Mr Babatunde Bafunsho, said there were various United Nations regulations concerning the conduct of security personnel during protests, and asked the operatives to always comply with the laws during protests.

He said, “The police should honour the people’s rights to freedom of assembly and expression because that is the only way they communicate their grievances to the government.

“During protests, the police should learn to work in line with human rights principles. Even if the protesters don’t get a permit which is not necessary before protesting, that is not grounds for the security agencies to harass the citizens.”

“The security personnel don’t need to tear-gas the protesters or shoot at them. They should allow them to protest and must be protected by the police, and later, everyone will go home,” Bafunsho added.

All rights reserved. This material, and other digital content on this website, may not be reproduced, published, broadcast, rewritten or redistributed in whole or in part without prior express written permission from PUNCH.