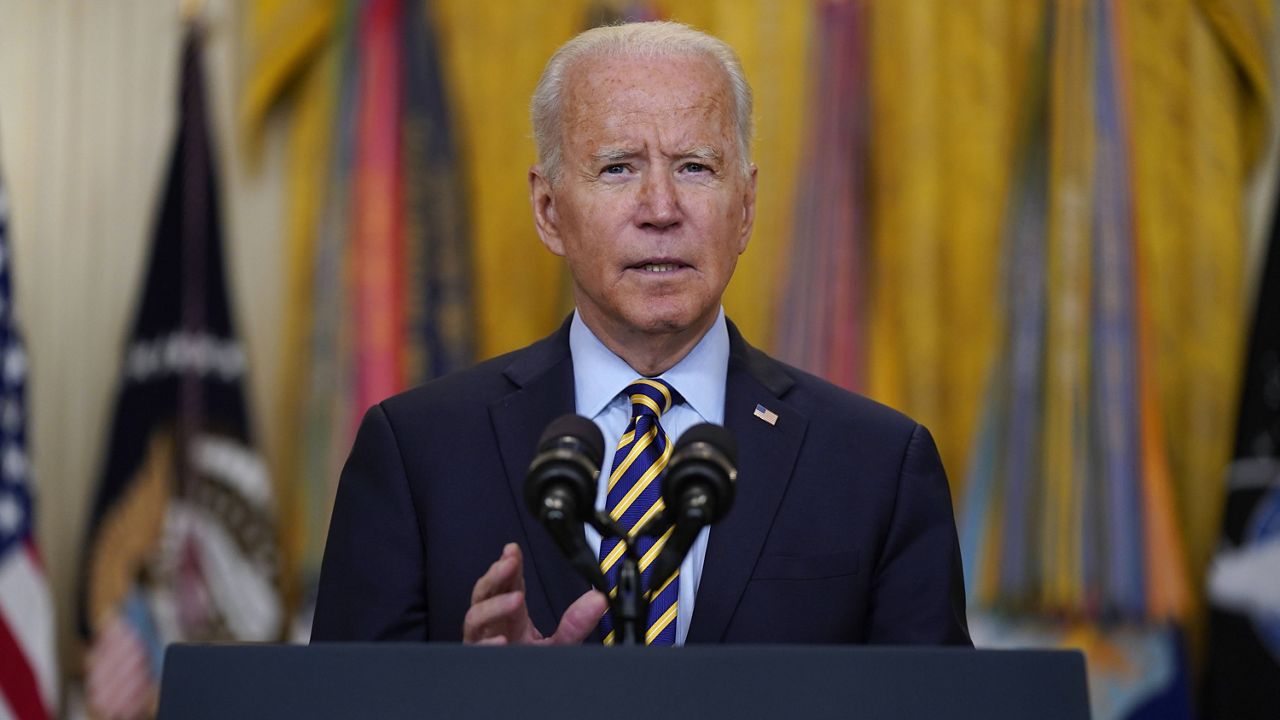 WASHINGTON — The Biden administration is taking the first steps toward requiring nearly all international visitors to the U.S. to be vaccinated for the coronavirus.

That’s according to a White House official who spoke on the condition of anonymity to preview the policy under development. The requirement would come as part of the administration’s phased approach to easing restrictions for foreign travelers to the country. No timeline has yet been determined.

Interagency working groups are studying how and when to safely move toward resuming normal travel. Eventually all international citizens entering the country, with some limited exceptions, are expected to need to be vaccinated against COVID-19 to enter the U.S.

MORE ON THE PANDEMIC:

— US plans to require COVID-19 shots for foreign travelers

HERE’S WHAT ELSE IS HAPPENING:

STATE COLLEGE, Pa. — Penn State University says it will require students, staff and visitors at all its campuses to wear masks while indoors.

The announcement came as the state deals with a surge in coronavirus cases fueled by the delta variant. Pennsylvania is reporting more than 1,000 cases of COVID-19 per day, nearly tripling over the past two weeks.

Penn State officials say the reinstated masking rule will apply to everyone, regardless of vaccination status. The school is also urging students and employees to get vaccinated.

More than 30 of Pennsylvania’s 67 counties are considered to have substantial or high levels of community transmission, according to the CDC. Half of Penn State’s 20 campuses are located in these counties. The university enrolls about 90,000 students.

Officials say anyone not fully vaccinated by Aug. 9 will be required to undergo virus testing during the fall semester.

FORT LAUDERDALE, Fla. — A South Florida hospital chain is suspending elective surgeries and putting beds in conference rooms, an auditorium and even a cafeteria as many more patients seek treatment for COVID-19.

Memorial has added 250 beds at its six hospitals in Broward County. Napp says more than 1,600 patients are in the hospital system, the “highest number of patients Memorial has ever seen.” Typically, the health system doesn’t have more than about 1,400 inpatients under its care at a time.

Across Florida, more than 12,000 patients were hospitalized with COVID-19 on Wednesday, and nearly 2,500 were in ICU beds. Florida’s confirmed pandemic death toll tops 39,000.

NAIROBI, Kenya — The director of the Africa Centers for Disease Control and Prevention says he came down with COVID-19 last week and if he had not been vaccinated earlier, “I would not be here by now.”

An audibly ill John Nkengasong told reporters that despite his vaccination in April, “the severity of the attack is unbearable.” He cited his experience to push back against vaccine hesitancy.

Meanwhile, the African Union says the first of the 400 million single-shot Johnson & Johnson doses that African countries have collectively procured on their own started arriving this week and all should be distributed by September 2022.

The African Union says the 400 million doses “bring Africa halfway towards its continental goal of vaccinating at least 60% of the population.”

Just 1.5% of Africa’s population has been fully vaccinated, and the continent has received just 103 million doses, far from the target of vaccinating 780 million by the end of this year. More than half of Africa’s 54 countries are seeing a deadly resurgence in confirmed coronavirus infections.

The additional cases brought the city’s total confirmed cases to 236,138, about a quarter of all the cases reported in Japan since the start of the pandemic.

Tokyo has been under a state of emergency since mid-July, and four other areas have since been added. But the measures, basically a ban on alcohol in restaurants and bars and their shorter hours, are increasingly ignored by the public, which has become tired of restrictions.

Japanese Prime Minister Yoshihide Suga, who has been criticized for insisting on hosting the Olympics despite the coronavirus spreading, says there is no evidence linking the surge in cases to the July 23-Aug. 8 Games.

At the same time, Suga said Tokyo exceeding 5,000 cases for the first time had provided “a stronger sense of urgency.”

“The infections are expanding at the pace we have never experienced before,” he said.

Suga pledged to “prevent the further spread of the virus by firmly carrying out vaccinations.”

Melbourne joins Sydney and Brisbane, Australia’s most populous and third-most populous cities respectively, in locking down due to the spread of the highly contagious delta variant.

Melbourne and surrounding Victoria state will lock down for seven weeks after eight new infections were detected in the city, Victoria Premier Daniel Andrews said.

Andrews gave less than four hours’ notice that the state would lock down from 8 p.m. He said his government had no other choice because only 20% of Australian adults had been fully vaccinated by Wednesday.

Andrews has accused neighboring New South Wales state of taking too long to lock down Sydney after a limousine driver who became infected while transporting a U.S. aircrew from Sydney Airport tested positive to the delta variant on June 16.

BEIJING — The delta variant is challenging China’s costly strategy of isolating cities, prompting warnings that Chinese leaders who were confident they could keep the coronavirus out of the country need a less disruptive approach.

As the highly contagious variant pushes leaders in the United States, Australia and elsewhere to renew restrictions, President Xi Jinping’s government is fighting the most serious outbreak since last year’s peak in Wuhan. The ruling Communist Party is reviving tactics that shut down China: Access to a city of 1.5 million people has been cut off, flights canceled and mass testing ordered in some areas.

That “zero tolerance” strategy of quarantining every case and trying to block new infections from abroad helped to contain last year’s outbreak and has kept China largely virus-free. But its impact on work and life for millions of people is prompting warnings that China needs to learn to control the virus without repeatedly shutting down the economy and society.

China’s controls will be tested when thousands of athletes, reporters and others arrive for the Winter Olympics in Beijing in February. And the ruling party faces a politically sensitive change of leadership in late 2022, for which leaders want upbeat economic conditions.

Last year, China shut down much of the world’s second-biggest economy and cut off almost all access to cities with a total of 60 million people — tactics imitated on a smaller scale by governments from Asia to the Americas.

SYDNEY — Australia’s most populous state is reporting the worst day of its outbreak of the coronavirus delta variant, with a record 262 new local infections and five deaths from COVID-19.

New South Wales state Premier Gladys Berejiklian said Thursday that four of the dead had not been vaccinated and that one had received a single dose of AstraZeneca in late May.

Australian authorities have urged people in Sydney not to wait the optimal 12 weeks before getting their second AstraZeneca dose.

AstraZeneca and Pfizer are the only vaccines available in Australia.

There have been 21 COVID-19 deaths in Sydney since the latest outbreak began in June. Sydney and surrounding cities have been locked down since June 26.

Only 20% of Australian adults had been fully vaccinated by Wednesday, according to government figures.

HONG KONG — Macao authorities on Wednesday ordered the closure of entertainment venues but not casinos, and coronavirus tests for its 600,000 residents, after the gambling city confirmed four new infections.

The city also plans to test some 600,000 residents after a family of four tested positive for the more infectious delta coronavirus variant. The mass testing is expected to last three days.

The daughter had recently returned from an exchange trip to mainland China, where authorities believe she was infected.

Macao Chief Executive Ho Iat-seng said at a news conference that if there are no new infections in the next 14 days, normal economic activities will resume.

Macao has reported only 59 coronavirus cases since the pandemic began, with no deaths.

The new cases have sparked concern about the economy of the city that is heavily reliant on tourism. It is the only Chinese city where casinos are legal.

MIAMI — As Florida continues to lead the nation in hospitalizations for COVID-19, Gov. Ron DeSantis is holding to his anti-mask, anti-lockdown stance.

He repeated it strongly Wednesday night in a fundraising email that also takes a shot at President Joe Biden, who has singled out the governors of Florida and Texas for criticism of their opposition to lockdowns and other strict pandemic measures.

DeSantis says that in Florida, “we will continue to lift people up, not lock people down. Florida is a free state, and we will empower our people.”

The governor adds that “we will not allow Joe Biden and his bureaucratic flunkies to come in and commandeer the rights and freedoms of Floridians.”

“So,” DeSantis says in closing, “when Joe Biden tells me to get out the way, I’ve got news for him. I will always stand between power-hungry tyrants and the people of Florida.”

LITTLE ROCK, Ark. — The number of students and staff at an east Arkansas school district who have quarantined because of a coronavirus outbreak has grown to more than 700.

Marion Superintendent Glen Fenter said Wednesday that 730 students and 10 staff members at his district have had to quarantine since classes began last week. He says 34 students and nine staff have tested positive for the virus.

The development comes as Arkansas lawmakers debate a proposal to lift the state’s ban on mask mandates by schools and other government entities. Gov. Asa Hutchinson signed the ban in April, but he called lawmakers into session this week urging them to roll it back for some public schools.

Ochsner Health said Wednesday the system had no pediatric COVID patients several weeks ago, but the number has been ranging from five to 15 the past two weeks.

However, Dr. William Lennarz who is head of pediatrics at Ochsner Hospital for Children says that doesn’t mean the delta variant is disproportionately affecting children. He says that “what is different is that children now make up the most susceptible population because children under 12 are 100% not vaccinated.”

Lennarz also says most of the hospitalized children aren’t critically ill with COVID-19. He says that is still a very rare occurrence for youngsters affected by the coronavirus.

MADISON, Wis. — Anyone who gets vaccinated against COVID-19 at a clinic at the Wisconsin State Fair will get a free cream puff, Gov. Tony Evers said Wednesday.

AMI Expeditionary Healthcare will run the free clinic at the fair in West Allis, the governor said. The clinic will offer Pfizer and Johnson & Johnson vaccines. Anyone who gets a shot there will receive a voucher for a free cream puff redeemable at the Cream Puff Pavilion.

The incentive comes as COVID-19 cases are surging across the state, driven largely by the highly contagious delta variant of the coronavirus that causes the disease.

The fair begins Thursday and is scheduled to run through Aug. 15.

The fourth and final winners of the scholarship and $1 million prize were chosen Wednesday and expected to be named next week.

Copyright 2021 The Associated Press. All rights reserved. This material may not be published, broadcast, rewritten or redistributed without permission.